The value of M&A in Emerging Asia during Q1 2019 fell sharply by 35% to USD 82bn. The decline was largely due to China, where the Q1 M&A market collapsed in light of trade wars with the U.S. and tightening local regulations on in-bound deals coming from China into other countries.

Apart from a few notable transactions in the ride-hailing sector (funding rounds for Didi in China and Grab in Singapore), few mega-deals featured foreign buyers. With 54 transactions for USD 4.2bn in Q1, the U.S. significantly outpaced others as the top foreign investor in the region - way ahead of second-ranked Japan (18 deals for USD 2.5bn).

This report provides an aggregated overview of the M&A deal activity in some 30 emerging countries in Emerging Asia, with individual focus on China, India and the Southeast Asia region. Our reports are presented in a consistent format from quarter to quarter, enabling users to analyse and compare data, and follow the latest developments in M&A. 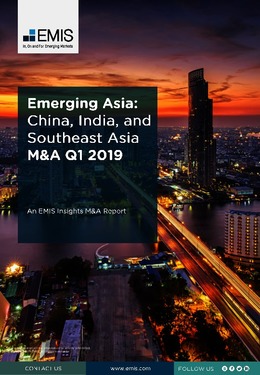