The third quarter of 2017 saw some very large foreign deals coming from China, USA, Australia and the UK, which nearly doubled the value of cross-border activity from H1 to EUR 22.5bn.

Overall for the nine months, deals in the Emerging Europe region were 1,544 in total, slightly down in terms of volume – Poland had 10 deals less y/y and the Czech Republic had 33 deals less y/y. Deal value, however, surged 55% y/y mainly due to a revival of large oil & gas transactions in Russia.

This report provides an in-depth overview of the M&A deal activity in 25 emerging countries across Europe, with a particular focus on Russia, Poland, Romania and Turkey. Our reports are presented in a consistent format from quarter to quarter, enabling users to analyse and compare data, and follow the latest developments in M&A. 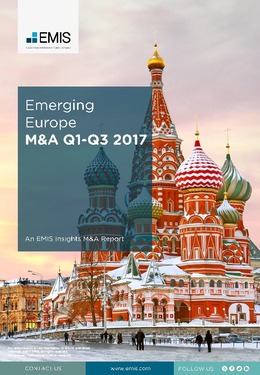