M&A activity in Emerging Asia during Q4 fell sharply to USD 68.2bn on the back of 975 deals - the lowest quarterly numbers since early 2015. With the exception of GlaxoSmithKline Consumer Healthcare in India (est. USD 4.5bn) and BMW Brilliance Automotive in China (USD 4.1bn), the last months of 2018 featured much fewer mega-deals compared to the first half of the year. Overall in 2018, the value of M&A stood 5.6% lower y/y at USD 490.9bn, and deal flow was also down by 4% to 4,204 deals.

Sector-wise, despite a 7% decline in activity from last year, IT & Internet again came on top with 858 deals. As far as deal value is concerned, Finance & Insurance climbed to the top spot with USD 64.34n in total, just ahead of second-ranked Real Estate & Construction with USD 63bn. 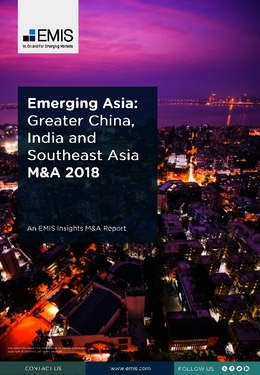