The aggregate value of M&A in Emerging Asia during the third quarter fell sharply to USD 115.1bn on the back of 1,108 deals. The summer months featured much fewer mega-deals compared to the first half of the year, which saw enormous transactions like Flipkart in India (USD 16bn) and Ant Financial Services (USD 14bn) in China. Overall for the Q1-Q3 period, however, the total value of M&A stood 12% higher y/y at USD 420.4bn, while deal flow was slightly down by 2.6% to 3,172 deals.

With 93 deals for USD 27.4bn in total so far in 2018, the US further increased its lead as the top foreign investor by both volume and value, way ahead of second-ranked Japan (37 deals for USD 5.3bn). Notable in Q3 was the purchase of Taiwan’s LCY Chemical by US private equity major KKR for USD 1.6bn. 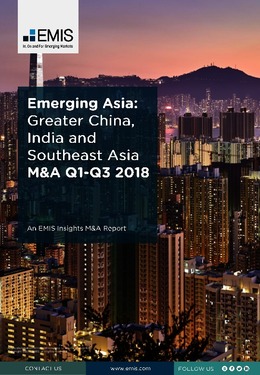