Brazil has rich mineral resources, making it a relevant player in the global mining industry. The country ended 2018 with the world’s largest niobium reserves (80% of the total) and ranking second in terms of tantalum reserves (31%), iron ore (19%) and rare earths (18%). Domestically, the mining sector was responsible for 12.8% of the country’s total export revenues and attracted 6% of the FDI that entered the country in 2018. Over the year, Brazil maintained its modest exit from the 2015-2016 recession, repeating its 2017 result with a 1% y/y growth in GDP, dampened by problems in the transportation sector in the first half of the year and the influence of the presidential elections in the second half. The performance of the extractive industry in 2018 was very much in line with that of the overall economy.

This report provides a complete and detailed analysis of the mining sector for Brazil. EMIS Insights presents in-depth business intelligence in a standard format across countries and regions, providing a balanced mix between analysis and data. 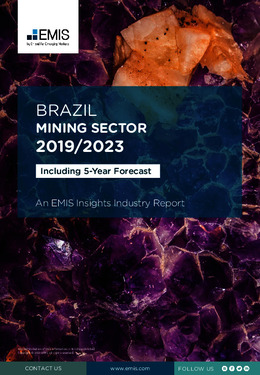