The discovery and development of abundant pre-salt hydrocarbon resources has transformed Brazil into one of the global leaders in both proven reserves and production of crude oil. The focus on deepand ultradeep-water exploration has also been a major driving factor in modernising the oil and gas sector, with an estimated BRL 10bn invested in research and development (R&D) over the years 2009-2018, according to Brazil’s Oil, Gas and Biofuels Institute (IBP). The sector is also a leading contributor to Brazil’s public finances: it attracted about BRL 45.7bn in signing bonuses during the 11 auctions held between 2009 and 2018m, and paid BRL 145.7bn in the form of royalties over the same period. Although the state monopoly of oil and gas exploration and production (E&P) officially ended as long ago as 1997, sectoral reforms have gained momentum in the last couple of years, with the streamlining of the government privatisation programme and Petrobras’ focus on higher crude output.

This report provides a complete and detailed analysis of the oil and gas sector for Brazil. EMIS Insights presents in-depth business intelligence in a standard format across countries and regions, providing a balanced mix between analysis and data. 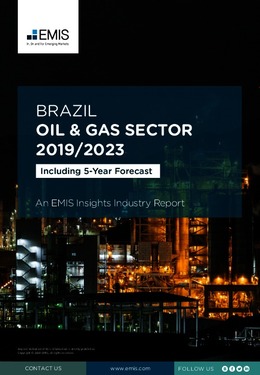