Brazil is among the global leaders in renewable energy generation, having the world’s largest biomass power capacity, and ranking third and ninth, respectively, in terms of hydropower and wind power capacity at end-2017. During that year, renewable energy sources accounted for 81.5% of Brazil’s installed capacity and for 83% of the power generated in the country. Although hydropower continued to dominate the country’s electric energy mix, with 71% of total power generation in 2017, wind power has been the fastest-growing energy source over recent years, in line with the government’s efforts to diversify the country’s energy mix and reduce vulnerability to climate change. Between 2011 and 2017, power generation from wind farms rose 15-fold. The year 2017 was also a turning point for the nascent solar power industry, which added 0.9 GW of centralised installed capacity and witnessed an exponential growth in distributed power generation from rooftop photovoltaic (PV) systems.

This report provides a complete and detailed analysis of the renewable energy sector for Brazil. EMIS Insights presents in-depth business intelligence in a standard format across countries and regions, providing a balanced mix between analysis and data. 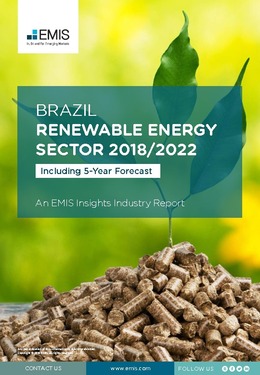