Brazil ranked third globally in 2018 in terms of installed capacity from renewable energy sources, after only China and the United States. It is first by installed biomass capacity, second in terms of hydropower capacity, and eighth regarding wind capacity. The country’s favourable geographic conditions have also promoted a massive uptake of photovoltaic systems, which led to a remarkable average annual growth of 224.5% of centralised and 214.4% of distributed solar power installed capacity over 2013-2018. Overall, in 2018, renewable sources accounted for 82.5% of total installed capacity in Brazil and for 85.9% of the power generated during the period. Hydropower remains the most explored energy source, although its share in the domestic electric energy matrix is gradually decreasing as other renewable sources such as wind and solar gain traction.

This report provides a complete and detailed analysis of the renewable energy sector for Brazil. EMIS Insights presents in-depth business intelligence in a standard format across countries and regions, providing a balanced mix between analysis and data. 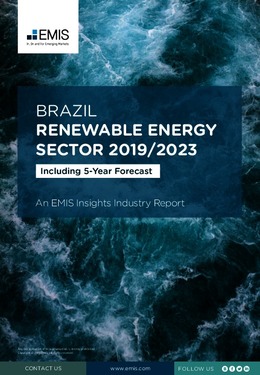