Brazil is among the leaders in the global IT market. In 2017, its sales accounted for 1.9% of the worldwide total, ranking ninth in the world and first in Latin America. Within the region, its leadership is undisputed, as it is responsible for 39.1% of the total Latin American IT market, way ahead of Mexico, which ranked second once again in 2017 with a market share of 21.2%. During the period, the country’s economic recovery allowed a 4.5% y/y expansion of the sector in sales value, prompted by an increase in demand for IT products and services. With a share of 48.8%, software and IT services led the sector’s growth, reporting a 3.7% y/y increase in the value of sales in 2017 and regaining strength after the slowdown during the 2016 recession. The Southeast region generates the bulk of Brazil’s IT sales, accounting for 61.4% of the total.

This report provides a complete and detailed analysis of the software and IT sector for Brazil. EMIS Insights presents in-depth business intelligence in a standard format across countries and regions, providing a balanced mix between analysis and data. 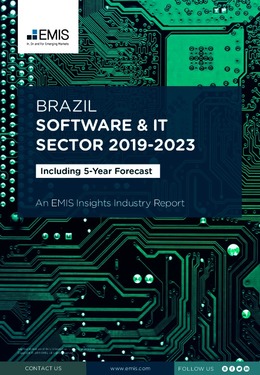