The tourism sector in Brazil has significant growth potential thanks to the country’s sector-relevant natural resources, which were recognised as the most abundant in the world in the 2017 Travel and Tourism Competitiveness Report by the World Economic Forum (WEF). In 2017, the tourism sector accounted for 7.9% of the country’s GDP (including both direct and indirect contributions), for 5.2% of formal employment and for 0.8% of FDI equity capital inflows into the country. Despite having raised the profile of several Brazilian destinations by hosting two of the most popular sporting events on the planet – the 2014 FIFA World Cup and the 2016 Rio Olympic and Paralympic Games – the government has not yet succeeded in placing Brazil among the top 35 tourist destinations in the world, and the country ended 2017 with an estimated share of just 0.5% in international tourist arrivals.

This report provides a complete and detailed analysis of the tourism sector for Brazil. EMIS Insights presents in-depth business intelligence in a standard format across countries and regions, providing a balanced mix between analysis and data. 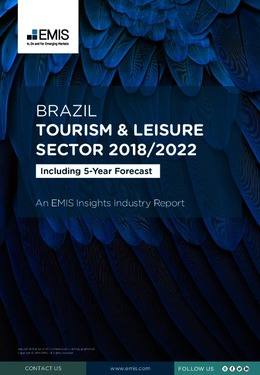