Ecuador is a major player in the oil and gas sector in Latin America. A member of the Organisation of Petroleum Exporting Countries (OPEC), Ecuador had the fourth-largest proven oil reserves in the region and was its sixth-biggest crude oil producer in 2015. The oil and gas sector has a paramount role in Ecuadorian economy, crude oil being the main product exported by the country and accounting for 35% of national exports in 2015. Since Ecuador is a commodity-exporting country, the slump of international oil prices since mid-2014 has affected the domestic economy, as revenues from oil exports contracted by 51.3% y/y in 2015. In addition, a prolonged period of underinvestment in exploration and hydrocarbon transport infrastructure has resulted in a relatively weak expansion of crude oil output at a CAGR of 2.1% over 2011-2015 and in very limited economic utilisation of the country’s natural gas reserves.

This report provides a complete and detailed analysis of the oil and gas sector for Ecuador. EMIS Insights presents in-depth business intelligence in a standard format across countries and regions, providing a balanced mix between analysis and data. 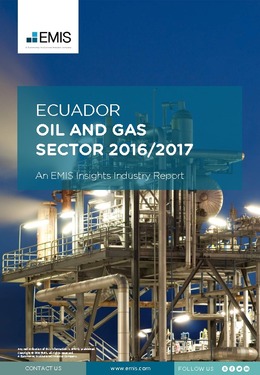