The growth of the cement sector in India is closely aligned to the prospects of housing, infrastructure and industrial activity. India is the second largest producer of cement after China, with an installed capacity of 545mn tonnes as of FY2020. As per the Cement Manufacturers Association (CMA), this sector is the fourth largest revenue contributor to the government and the second largest revenue contributor to the Indian Railways. In addition, it employs over 1mn people directly and indirectly. Cement manufacturers are typically located close to the limestone mines as limestone is a key raw material, which is inexpensive but bulky, making transportation uneconomical. High logistics costs is a major deterrent to transporting cement, which is also low value but bulky. Thus, India’s official data on cement divides the country into five geographical regions, each with a specific profile as regards cement manufacturing and demand. ​

This report provides a complete and detailed analysis of the cement sector for India. EMIS Insights presents in-depth business intelligence in a standard format across countries and regions, providing a balanced mix between analysis and data. 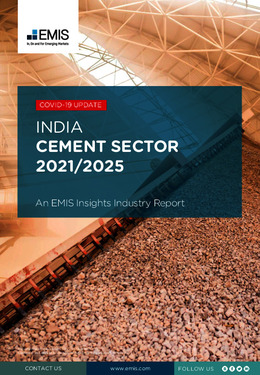