As in any developed or emerging market, financial intermediation in Romania represents an important generator of wealth and stability for the whole economy. With net assets of credit institutions amounting to 51.9% of the GDP, the financial sector still remains somewhat underdeveloped. After the 2008 crisis, net assets soared by 57% to RON 394bn in 2016, compared with RON 251bn in 2007. However, they expanded at a slower pace than Romania’s GDP. Foreign ownership of credit institutions grew from 83% of total net assets in 2011 to 91.3% in 2016. Private deposits soared at a compound annual growth rate (CAGR) of 7.5% between 2011 and 2016, whereas total loans and commitments increased at a CAGR of 3.8% over the same period. Thus, with its loans-to-deposit ratio at 83.2% in 2016, the banking sector remains liquid and stable. The share of the banking sector in total employment decreased from 1.9% in 2011 to 1.5% in 2016 as a result of the financial crisis and the decrease in the number of credit institutions from 41 in 2011 to 37 in 2016.

This report provides a complete and detailed analysis of the banking sector for Romania. EMIS Insights presents in-depth business intelligence in a standard format across countries and regions, providing a balanced mix between analysis and data. 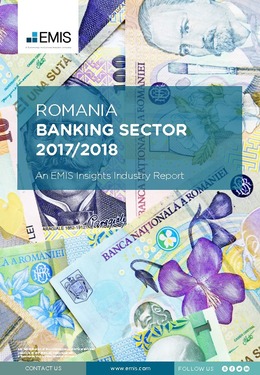