M&A activity in Latin America & the Caribbean region had a strong conclusion of the year as in Q4 deals reached 500, the highest quarterly number in 2021. Their cumulated value was USD 26.1bn, which respectively was the lowest quarterly amount during the year. For the full twelve months, activity surged 26.7% to 1,837 transactions whose aggregate amount more than doubled to USD 122.6bn, marking one of the strongest annual performance for the region in recent times

Amidst the biggest markets deal flow was higher in Brazil and Colombia, which registered respective increases of 49% and 36%. Mexico was relatively unchanged y-o-y with 199 deals, while Chile and Argentina were both down by 14% and 17%.

This report provides an in-depth overview of the M&A deal activity across 11 countries in Latin America, and the countries in Central America and the Caribbean region. Particular focus is put on Brazil, Colombia, Mexico, Argentina and Chile. Our reports are presented in a consistent format from quarter to quarter, enabling users to analyse and compare data, and follow the latest developments in M&A. 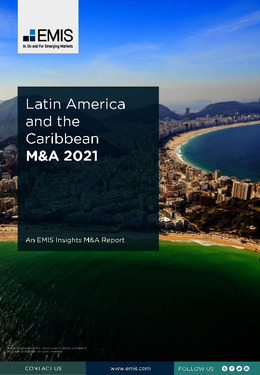