In 2015, the mining sector of Argentina – which excludes oil and gas extraction – accounted for 0.7% of the country’s GDP, a figure that has remained relatively stable since 2011. However, mining plays a key role as the fourth-largest contributor to national exports (a share of 6.3% in 2015), following the oilseeds complex, cereals and automotive sector, and has recorded consistent trade surpluses in the past. In 2015 alone, the mining sector posted a trade surplus of USD 2.6bn, 11.6% up y/y. In global terms, Argentina is among the top 20 largest producers of 16 metallic and non-metallic minerals, according to USGS and the World Mining Congress, with strong competitive advantages in the production of lithium, which is expected to become the main driving force of the sector over the next decade.

This report provides a complete and detailed analysis of the mining sector for Argentina. EMIS Insights presents in-depth business intelligence in a standard format across countries and regions, providing a balanced mix between analysis and data. 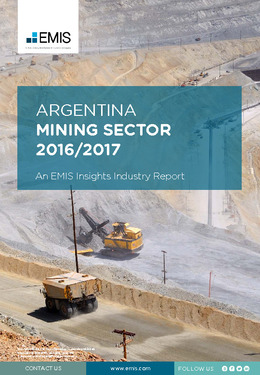