Brazil is the world’s second largest producer of ethanol and biodiesel after the US, and a pioneer developing biofuels as an economically viable alternative to fossil fuels since the introduction of flex-fuel (dual-fuel) vehicles in the country in 2003. The main biofuels used in Brazil are sugarcane ethanol, comprising anhydrous ethanol for blending with gasoline and hydrous ethanol for direct use in flex-fuel vehicles, as well as biodiesel, made from vegetable oils and animal fats. Pure fossil fuels are not available to the final consumer due to the mandatory biofuel blend imposed by the government back in the 1930s. Since 2015, gasoline has had a mandatory content of 27% anhydrous ethanol, while the biodiesel share in diesel has been gradually increasing and was set at 11% in September 2019.

This report provides a complete and detailed analysis of the biofuel sector for Brazil. EMIS Insights presents in-depth business intelligence in a standard format across countries and regions, providing a balanced mix between analysis and data. 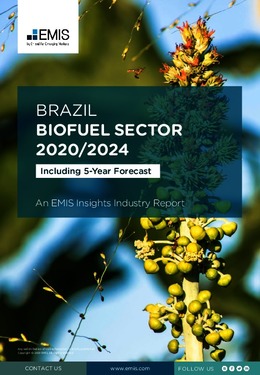