Albeit challenging for all nations, the COVID-19 pandemic has been more of a driving force for the infrastructure sector in many Latin American countries than a restraining factor. In most Latin American countries, infrastructure, especially transport infrastructure, is owned and operated largely by the government. Given that the pandemic created not only a health crisis, but also an economic one, governments across the globe have been forced to increase their spending to jumpstart economic activity. Latin America has not been an exception from this trend, and generous fiscal packages, many of which including public spending on infrastructure, were passed in 2020 and the first nine months of 2021. Another factor propelling investments in infrastructure was the loose monetary policy stance in the region. As central banks tried to foster economic activity in times of a health crisis, monetary policy rates reached historically low levels in 2020. This, in turn, reduced borrowing costs and encouraged both public and private companies operating in the infrastructure sector to raise investments. ​

This report provides a complete and detailed analysis of the infrastructure sector for South Africa. EMIS Insights presents in-depth business intelligence in a standard format across countries and regions, providing a balanced mix between analysis and data. 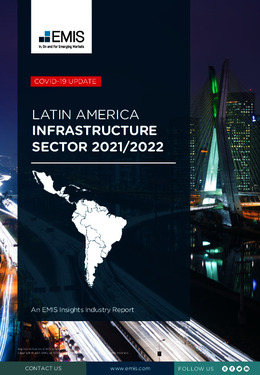