Chile is a key global player in the production of metallic minerals. In 2015, the country was the world’s largest copper mine producer, with a 29.9% share in global output, the second biggest molybdenum mine producer (18.2% share) and the fourth largest producer of silver (5.5%). In terms of non-metallic minerals, the country ranked first in production of iodine (a 66% share), second in lithium compounds (36%) and eighth in potassium compounds (3.1%). In 2015, mining was the fourth largest economic sector of Chile, accounting for 9.9% of the country’s GDP, for 2.9% of total employment and for 53.6% of national exports. Yet, over the period 2010-2015, mining exports’ value declined by an average 5.1%, as a result of the dropping international metal commodity prices. In the same period, exports rose significantly in volume terms by a cumulative 38.5%, resulting in a moderate expansion of domestic production at a CAGR of 5.2%.

This report provides a complete and detailed analysis of the mining sector for Chile. EMIS Insights presents in-depth business intelligence in a standard format across countries and regions, providing a balanced mix between analysis and data. 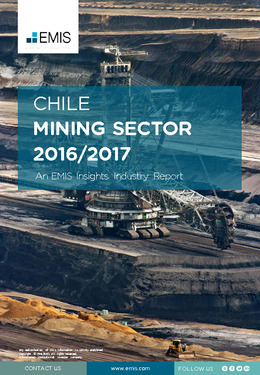