Chile’s is a relatively small economy – 42nd-largest in the world and sixth-biggest economy in Latin America in 2016, according to the World Bank. However, its retail sector is well developed, mature and sophisticated, and in many aspects on par with the retail sector in developed countries. In recent years, the trade sector has emerged as one of the key contributors to economic growth, expanding its GVA at a CAGR of 3.5% over 2011-2016, a growth-rate above that of the overall economy (3% CAGR), and reaching a share of 9.1% in the country’s GDP in 2016. The sector also has an important socio-economic role, being responsible for 8.2% of formal employment and 24.2% of the active enterprises in the country at end-2016, according to EMIS Insights estimates. Department stores, supermarkets and shopping centres are the most developed retail channels, in all cases featuring high levels of concentration. However, over the period 2011-2016, online retail was the most dynamic channel, expanding its sales at a robust CAGR of 20.7%.

This report provides a complete and detailed analysis of the retail sector for Chile. EMIS Insights presents in-depth business intelligence in a standard format across countries and regions, providing a balanced mix between analysis and data. 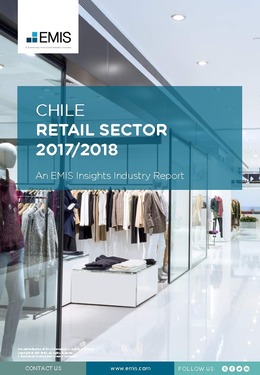