In the third quarter of 2019, China’s air transportation sector continued to suffer from the temporary grounding of all 96 of China’s Boeing 737 MAX 8 aircraft after Ethiopia crash in March 2019. The aircraft grounding is expected to last at least until January 2020. The negative impact on the business performance of China’s major air carriers, such as China Southern Airlines (CSA), Air China, China Eastern Airlines (CEA), Hainan Airlines and Shandong Airlines, was partly offset by the drop in jet fuel price in the third quarter of 2019, which allowed companies to achieve positive net profits in this period. The ongoing trade dispute between the US and China, along with the Hong Kong protests, weighed on international air freight traffic, which continued to decline over the same period of the previous year. On September 1, 2019 the US imposed additional tariffs on USD 125bn worth of Chinese goods, while China began imposing additional tariffs on a USD 75bn worth of US imports. However, the US postponed the implementation of tariffs scheduled for October 2019, which creates a positive outlook for the next few months.

This report provides a complete and detailed analysis of the air transportation sector for China. EMIS Insights presents in-depth business intelligence in a standard format across countries and regions, providing a balanced mix between analysis and data. 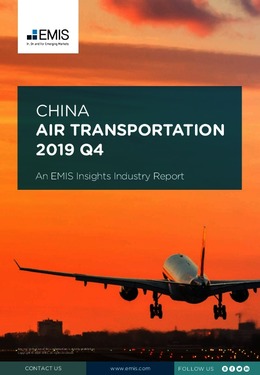