Construction has always been a favoured tool of the Chinese authorities for stimulating the economy and its development closely reflects that of GDP. After the global financial crisis of 2008, a government stimulus package of RMB 4tn was used for infrastructure projects, government-subsidised housing and new rural construction. Beijing also intends to use construction spending as a means to achieve the growth targeted in the 13th Five Year Plan (2016-2020) or at least to avoid a contraction of the economy. The construction sector is likely to perform well in the medium term, supported by infrastructure projects aimed at reducing regional disparities. These projects include road infrastructure to improve and expand intra- and inter-city rds new solar and wind parks, as well as hydropower units. In 2015, the construction sector comprised 6.8% of nominal GDP and employed 5.9% of workers. Two of China's six major regions – East and South Central China – accounted for nearly two-thirds of all new contracts in the sector for 2015 in terms of value.

This report provides a complete and detailed analysis of the construction sector for China. EMIS Insights presents in-depth business intelligence in a standard format across countries and regions, providing a balanced mix between analysis and data. 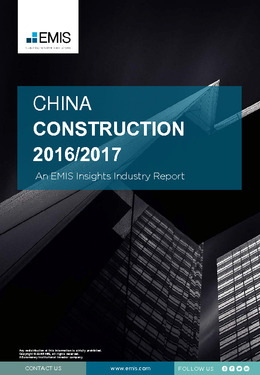