Being the world’s second-largest economy, China relies heavily on natural resources, which are essential for the country’s sustainable development. The rising energy consumption has already made China the world’s largest producer and consumer of coal. It is mainly used for power generation and, despite the strenuous efforts to cut the share of coal in the overall energy mix to 55% by 2020, down from 60% in 2017, the country is expected to keep its leading position as a producer and a consumer. The increased domestic demand for iron ore has been another driver of the mining industry. China depends on steel supplies for its ongoing construction and urbanisation projects. In 2017, the country accounted for roughly 60% of the global steel production. It is also a monopolist on the market for rare earths, with a share of 80% of the global rare earth production.

This report provides a complete and detailed analysis of the mining sector for China . EMIS Insights presents in-depth business intelligence in a standard format across countries and regions, providing a balanced mix between analysis and data. 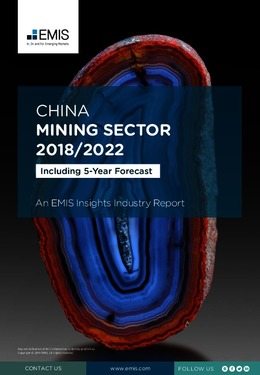