Colombia is Latin America’s fourth-largest economy, after Brazil, Mexico and Argentina, but, unlike its peers in the region, the country has experienced steady growth over the past five years, thanks to stable and conservative economic policies. During H1 2018, pessimism and political uncertainty tarnished economic performance, but after the parliamentary and presidential elections, investment and GDP entered on an upward trend. Colombia’s mining sector tends to represent around 2% of the country’s GDP, and employs more than 160,000 people directly. In several departments* of Colombia, such as La Guajira, Cesar, Choco, and Cordoba, mining activities are the primary source of income for government and inhabitants alike. The country is a leading player in the global coal and emeralds market and is poised for growth in gold and copper, thanks to its geological traits and state incentives.

This report provides a complete and detailed analysis of the mining sector for Colombia. EMIS Insights presents in-depth business intelligence in a standard format across countries and regions, providing a balanced mix between analysis and data. 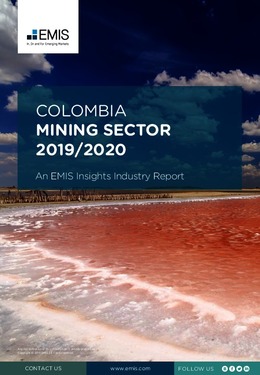