The mining and quarrying sector, including oil and natural gas extraction, generated a gross output of CZK 67.3bn in 2017, decreasing by 0.7% y/y in real terms and recording the smallest drop in the period 2013-2017. The gross output of mining and quarrying accounted for 0.6% of total gross output of the Czech economy in 2017, declining from 0.8% in 2013. The gross value added (GVA) of the sector dropped by real 9.6% y/y to CZK 33.1bn in 2017. Its share of the total gross value added also decreased to 0.7% in 2017 from 0.9% in 2013. The declining shares of the sector’s gross output and GVA were attributed to the country’s shortage of minerals, as well as its dependence on the imports of crude oil and natural gas. The mining and quarrying sector provided employment to 0.6% of the country’s labour force in 2017. The country is the second largest hard coal producer in the EU28 in 2017, having a share of 6.8% and the third-largest producer of lignite in the EU in 2017, having market share of 10.3%, according to data of the European sectorial association Euracoal.

This report provides a complete and detailed analysis of the mining sector for the Czech Republic. EMIS Insights presents in-depth business intelligence in a standard format across countries and regions, providing a balanced mix between analysis and data. 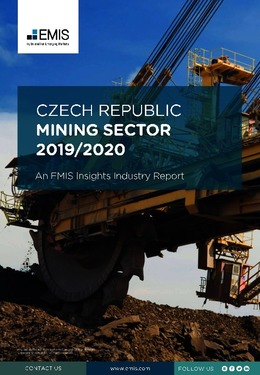