Ecuador is a major player in the oil and gas sector in Latin America. A member of the Organisation of Petroleum Exporting Countries (OPEC), in 2017 Ecuador had the third-largest proven oil reserves in the region and was its sixth-biggest oil producer. The oil and gas sector has a crucial role in the Ecuadorian economy, with crude oil being its main export item (32.4% share in 2017). Despite the uptick in international oil prices during the year, domestic oil output continued to decrease, as a result of agreed production cuts within the framework of OPEC, but also because of a prolonged period of underinvestment in exploration and hydrocarbon transport infrastructure. However, due to positive price effects, the country’s export revenues from crude oil rose by 22.5% y/y to USD 6.2bn in 2017. At the same time this increased imports of oil derivatives and LPG to USD 2.2bn, since the country relies on imported fuels to meet its domestic demand.

This report provides a complete and detailed analysis of the oil and gas sector for Ecuador. EMIS Insights presents in-depth business intelligence in a standard format across countries and regions, providing a balanced mix between analysis and data. 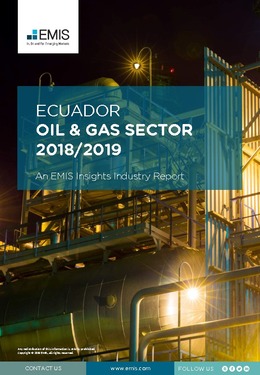