The Hungarian agricultural sector is relatively small, accounting in 2015 for only 1.9% of the agricultural output of the European Union. The country was the sixth largest producer of industrial crops in the EU that year. The sector contributed almost 3% to Hungary’s nominal GDP in 2015. The agricultural labour force amounted to 4.8% of the total labour force in Hungary. Crop production accounted for 58.2%of the agricultural output value, while animals and animal products represented 34.8%. The most important crops are cereals (primarily wheat and grain maize) and industrial crops (mostly oilseeds), with 28% and 12.9% of the total output, respectively, in 2015. Live animals, especially poultry and pigs, are the most significant among animal outputs.

This report provides a complete and detailed analysis of the agriculture sector for Hungary. EMIS Insights presents in-depth business intelligence in a standard format across countries and regions, providing a balanced mix between analysis and data. 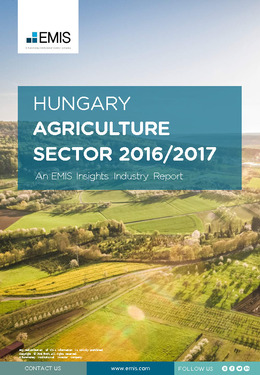