The automotive sector in Hungary plays an important role in the country’s economy and exports. In 2016, the transport equipment GVA represented a 4.5% share in the country’s GDP. In 2016, the transport equipment sector accounted for almost a quarter of the total industrial sales as top automotive manufacturers such as Suzuki, Audi, Daimler and Opel have established local production facilities. The bulk of the country’s automotive production, about 90%, goes to export markets, with passenger car exports accounting for 27% of the overall Hungarian exports in euro terms. In 2016, the country ranked 9th in the EU in terms of PC production with a 3.2% share, but at the same time had one of the lowest ownership rates with 313 vehicles per 1,000 inhabitants. The segment of new passenger cars has been growing at faster rates in recent years as economy recovered, unemployment went down and consumer income rose. As of August 2017, the automotive sector employed close to 168,000 people.

This report provides a complete and detailed analysis of the automotive sector for Hungary. EMIS Insights presents in-depth business intelligence in a standard format across countries and regions, providing a balanced mix between analysis and data. 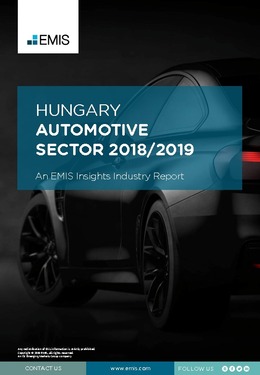