Indonesia’s insurance sector is underdeveloped, with penetration rates well below the averages for the world in general and for Asia in particular. The sector generates less than 1% of the country’s GDP, while its premium income was equivalent to just 2.4% of GDP in 2017, compared to Asia’s average of 5.6%. Widespread poverty, lack of public awareness and cultural barriers constrain penetration growth. Gross insurance premiums grew at a CAGR of 18% between 2010 and 2017, driven by the life insurance subsector, which takes about 47% of total gross insurance premiums. Indonesia ranks as the third largest insurance market in the Association of Southeast Asian Nations (ASEAN) regions. As of end-2016, there were 383 companies operating in the insurance sector, of which 146 were insurance and reinsurance companies and 237 were insurance intermediaries.

This report provides a complete and detailed analysis of the insurance sector for Indonesia. EMIS Insights presents in-depth business intelligence in a standard format across countries and regions, providing a balanced mix between analysis and data. 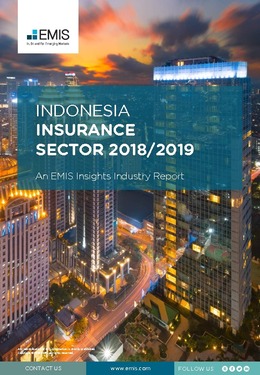