India’s electric power sector, comprising generation, transmission and distribution, is a key enabler of the country’s economic growth. Globally, India is the third-largest producer of power, after China and the US. Total electricity generation reached 1,307 TWh in FY2018. India also ranks fifth-largest in terms of installed power generating capacity, posting 344GW as of March 31, 2018. Additionally, the country is the world’s third-largest consumer of power. Thermal, renewable, hydro and nuclear accounted for 64.8%, 20.1%, 13.2%, and 2% of total installed capacity respectively in FY2018. There has been a discernible shift in power generation focus away from fossil fuels towards greener and more sustainable sources of energy, particularly towards renewable sources of power.

This report provides a complete and detailed analysis of the electric power sector for India. EMIS Insights presents in-depth business intelligence in a standard format across countries and regions, providing a balanced mix between analysis and data. 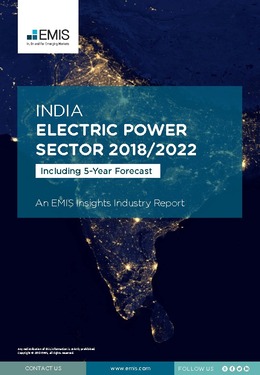