The Indian steel industry contributes around 2% of the country GDP and employs some 500,000 people directly and about 2mn indirectly. The Indian government sees the steel sector as strategically important and as a foundation for rapid industrial development. According to the Ministry of Steel, the steel industry has an output multiplier effect of nearly 1.4 on GDP, and an employment multiplier factor of 6.8. The sector has taken advantage of the country’s abundance of iron ore reserves, its cheap but qualified labour force, and government support policies. As a result, India is close to
becoming the second-largest crude steel producer after China, outpacing Japan. In FY2017, India became a net exporter of iron and steel, in both volume and value terms, as local companies ramped
up production.

This report provides a complete and detailed analysis of the steel sector for India. EMIS Insights presents in-depth business intelligence in a standard format across countries and regions, providing a balanced mix between analysis and data. 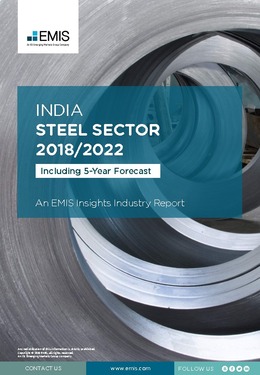