South Korea is among the top 10 countries in the world in terms of most developed transport and energy infrastructure. This is related to record-high public investment in expansion and modernisation of the national infrastructure. On the other hand, the participation of the private sector in the development of the country’s infrastructure remains limited to projects in specific segments, such as power generation and oil refining. The government will continue to be the main driver for the development of South Korea’s infrastructure in the coming years. It has recently released a series of ambitious investment plans that aim to support the transition towards low-carbon economy and adapt the country’s transport and energy infrastructure to the post-COVID-19 context.​

This report provides a complete and detailed analysis of the infrastructure sector for South Korea. EMIS Insights presents in-depth business intelligence in a standard format across countries and regions, providing a balanced mix between analysis and data. 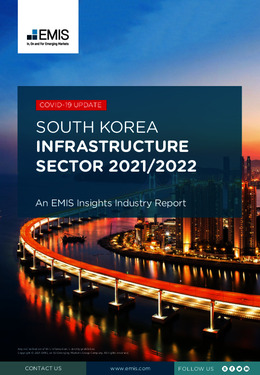