Mexico is a key global player in the production of metallic and non-metallic minerals. In 2015, the country was the world’s largest silver producer, with about 20% of global output, the fifth-biggest lead and molybdenum producer, and the seventh-largest gold miner. In addition, the country ranked among the top five global producers of fluorite, bismuth, celestite and sodium sulphate. The mining sector also has an important socio-economic role, accounting for 1.6% of the country’s GDP, 2% of its employment and 1.1% of total FDI inflow into the country in 2015. Mining was also the sixth largest-foreign exchange generator, with a trade surplus of USD 11bn during the year, behind the automotive sector, electronics, personal remittances, oil & gas and tourism. Over the period 2011-2015, the production volume of the sector decreased at an annual average rate of 0.6%, mainly due to weak investment activity stemming from low international metal prices.

This report provides a complete and detailed analysis of the mining sector for Mexico. EMIS Insights presents in-depth business intelligence in a standard format across countries and regions, providing a balanced mix between analysis and data. 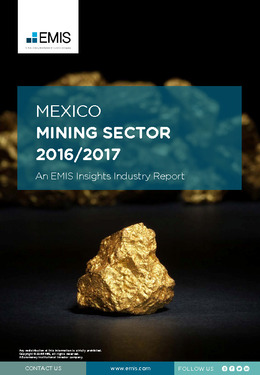