The oil and gas sector, one of the most important economic sectors in Malaysia, accounted for 11.3% of the country’s GDP in 2015. In that year, the state oil company, Petronas, contributed a total of MYR 26bn in dividends to the Malaysian government, which was 11.7% of total 2015 Malaysian government revenue. While Petronas Carigali, a subsidiary of the state oil company, is the largest oil explorer and producer in Malaysia, a large number of international oil and gas players have signed PSAs with Petronas and have been actively exploring and developing Malaysia’s oil and gas resources for decades. Petronas also dominates the downstream oil and gas segment, although other regional and international oil and gas players also have a significant presence on the Malaysian market.

This report provides a complete and detailed analysis of the oil and gas sector for Malaysia. EMIS Insights presents in-depth business intelligence in a standard format across countries and regions, providing a balanced mix between analysis and data. 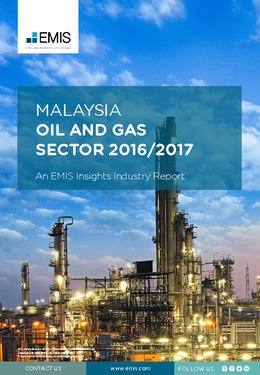