Renewables are the second largest source of electricity in the Philippines. They contributed to a fifth of the country’s power generation in 2020, after coal, and ahead of natural gas and oil. The share of renewables is set to further increase as the government wants to make them the primary energy source in the next two decades. The Philippines ranks third in the world by installed geothermal power capacity, according to figures provided by the International Renewable Energy Agency (IRENA). On a regional level, the country is ASEAN’s third largest by wind, and the fourth largest by solar capacity. As of the end of 2020, the country had an RE capacity of 7.65 GW, with hydro being the largest source (3.8 GW), followed by geothermal and solar with 1.9 GW and 1.0 GW, respectively. Geothermal power takes 25% of total RE capacity but it contributes to half of RE generation. ​

This report provides a complete and detailed analysis of the renewable energy sector for the Philippines. EMIS Insights presents in-depth business intelligence in a standard format across countries and regions, providing a balanced mix between analysis and data. 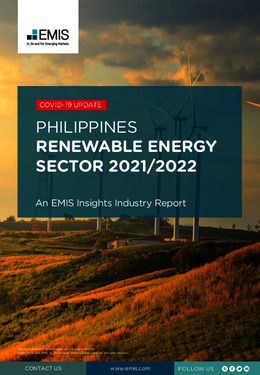