Agriculture generates slightly over 2% of Poland’s GDP and provides employment for a sixth of the workforce. The gross value added (GVA) of the Polish agricultural sector totalled PLN 41.59bn in 2016, edging up 0.2% from 2015. The sector employed 2.4 million people in 2015, the vast majority of them self-employed farmers. The sector is highly fragmented, with 75% of the farms having 10 ha or less. Farms over 10 ha, however, hold 72% of the country’s agricultural land. Poland is the European Union’slargest producer of apples and its third-largest producer of cereals. It is in the top three in production of carrots, sugar beets, sweet lupins and dry pulses, as well as poultry. Cereals production in the country increased by 8% in 2016, according to initial estimates. The growth reversed a 12% drop in 2015, when an extreme drought in the summer months damaged crops.

This report provides a complete and detailed analysis of the agriculture sector for Poland. EMIS Insights presents in-depth business intelligence in a standard format across countries and regions, providing a balanced mix between analysis and data. 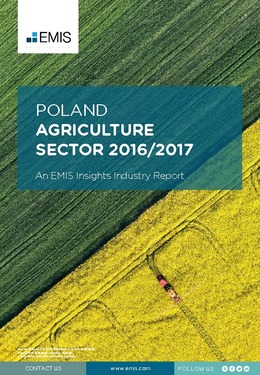