In 2017 Poland preserved its position as the sixth largest electricity producer in the EU. The electric power sector has a major economic and social impact on the Polish economy. It generated revenue of PLN 132.6bn in 2017, which was equivalent to 6.7% of the country's GDP. During the year, the electricity generation rose by 2% y/y to 165.9 TWh, falling below the growth in consumption (2.1% y/y). As a result, for the second consecutive year, Poland relied on imports to meet its domestic electricity demand. In recent years, the sector has witnessed a slow, but steady restructuring process, aimed at diversifying energy sources away from coal. This has prompted the development of new renewable energy-based plants in the country. Nevertheless, Poland’s electricity continues to come mainly from coal and lignite-fired units, which accounted for almost 80% of the generation in 2017.

This report provides a complete and detailed analysis of the electric power sector for Poland. EMIS Insights presents in-depth business intelligence in a standard format across countries and regions, providing a balanced mix between analysis and data. 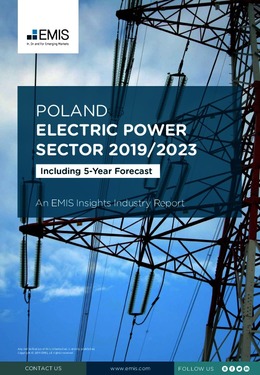