Mining is one of Russia’s key industries: in 2016 the “mining and quarrying” sector – a category which in Russian statistics includes oil and gas extraction, as well as mining more narrowly defined – generated 8.5% of the country’s GDP. This sector (which we will generally refer to as “mining”) is also a big contributor to the country’s budget, as it accounts for more than a fifth of the federal government’s revenues. The sector is characterised by low levels of competition, with a fewcompanies controlling the majority of production and sales in any given segment. Western sanctions, low commodity prices and economic recession have impeded the sector’s development in recentyears. The negative effects were partly offset by ruble depreciation, which gave local producers a competitive edge over rivals abroad.

This report provides a complete and detailed analysis of the mining sector for Russia. EMIS Insights presents in-depth business intelligence in a standard format across countries and regions, providing a balanced mix between analysis and data. 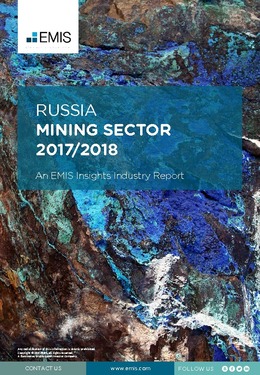