The construction sector plays a key role in Thailand’s growing economic development, providing 2.8% of the country’s GDP and employing around 2.28 million people in 2015. In spite of the political instability of 2013 that led up to the military coup the year after, as of end-2016, Thailand’s military government has majority support and royal backing. This has set the country’s construction and real estate sector for an upward trajectory. However, the sector is not without challenges, as Thailand faces competition from its regional neighbours, a global economic slowdown, and political uncertainty following the death of its revered King Bhumibol Adulyadej on October 13, 2016. Other setbacks include fragmentation and the importance of government connections in securing contracts.

This report provides a complete and detailed analysis of the construction and real estate sector for Thailand. EMIS Insights presents in-depth business intelligence in a standard format across countries and regions, providing a balanced mix between analysis and data. 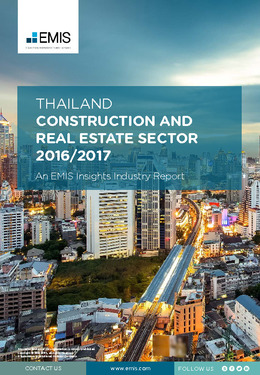