Venezuela is a leading player in the global oil and gas industry. A founding member of the Organisation of Petroleum Exporting Countries (OPEC) and of the Gas Exporting Countries Forum (GECF), Venezuela holds the world’s largest proven oil reserves, as well as the eighth-biggest natural gas reserves, as of December 2015. The oil and gas sector has a paramount role in Venezuela’s economy, crude oil being the main product exported by the country, accounting for 75% of totalexports in 2015, while the share of the entire sector in national exports exceeded 90%. Since Venezuela is a commodity-exporting country, the slump of international oil prices since 2014 has  affected the domestic economy, as revenues from oil exports contracted by 50.7% y/y in 2015. Inaddition, a prolonged period of underinvestment in exploration has resulted in a steady decline in oil output since 2012 and in relatively small economic utilisation of the country’s abundant natural gas reserves.

This report provides a complete and detailed analysis of the oil and gas sector for Venezuela. EMIS Insights presents in-depth business intelligence in a standard format across countries and regions, providing a balanced mix between analysis and data. 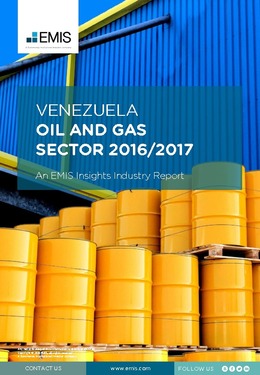